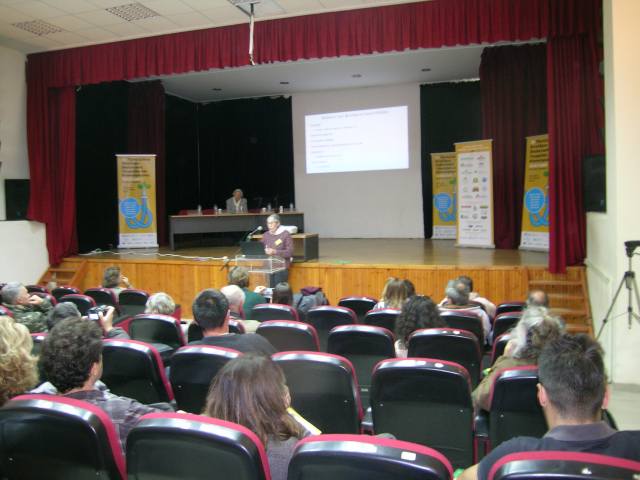 The 2nd National Conference of Organic Agriculture and Livestock was successfully organized by the Union of Organic Farmers of Northern Greece from 12 to 15 November in Neo Petritsi, Serres.
Co-organizers of the conference were the Network for Biodiversity and Ecology in farming «AEGILOPS», The Union of Organic Farmers of Serres and Sintiki municipality. The conference was held under the auspices of the Ministry of Agriculture, the Ministry of Macedonia-Thrace and the Central Macedonia region.
This year’s conference was dedicated to the management of water resources, in order to bring together producers, consumers and all agencies involved in a discussion on the sustainable management of water resources and the importance of agriculture and organic farming.
The conference, which was attended by about 300 farmers, breeders, processors, scientists involved with the agri-food chain, and consumers, was honored by the presence of the new Deputy Minister of Rural Development and Food Mr. Tsironis, the spokesman for the Deputy Minister of Internal Affairs Ms. Kollia-Tsarouha Mary, county deputies and the local authorities. Besides the major issue of water, the weekend included issues concerning organic riculture and livestock such as management and adaptability of local plant varieties and animal breeds in organic production and quality products, organic viticulture and organic improvement, the institutional framework on organic farming and organic seed, cottage industries and organic farmers markets. The program also made a presentation of innovative applications for organic agriculture and biodiversity within the European program «Capsella» such as implementation of modern surveillance technology of soil fertility management and the olive fly, agro-ecological approaches, ecological footprint, etc.
In the parallel events, on Saturday, November 12, the EAVVE appreciated the hospitality of the local community and invited the theatrical shape teachers from Thessaloniki «Dithiramvos ex Amaxis», who presented a free educational theatrical performance for children. Finally, on Monday, November 14, in the adjacent room there was an exhibition of written notices (posters) with a scientific interest in organic farming.
The conference honored the former directors of Gene Bank Nikos Stavropoulos and Stelios Samaras, former researcher of ETHIAGE Konstantinos Bladenopoulos and the University of Thessaly Agriculture Prof. Stella Galanopoulou- Sendouka, for their contribution to the conservation of plant genetic resources of the country. Conclusions of the conference briefly included topics highlighting the importance of communication and synergy between people, institutions and the state for the promotion of organic agriculture, and to address the problems of organic farmers and organic breeders as well as the importance of education
in fostering organic agriculture, collaborative and ecological consciousness, to both producers and consumers. Moreover, the need for systematic work towards the promotion of the uniqueness of the quality of organic products, particularly from traditional crops / varieties and domestic animal breeds was highlighted, and it was deemed important to find a way to highlight once again the organic agriculture as a civil movement potential and a promise for Greek agriculture and society, in the midst of economic crisis. Finally, locating the large gap in the single representation of the industry, the need emerged to reopen a Panhellenic institution for better coordination of professional organic farmers and bio-breeders.
The Union of Organic Farmers of Northern Greece and the organizers of the 2nd National Conference of Organic Agriculture and Livestock thanked warmly donors, supporters and volunteers of the conference, without whose contribution the event would have been impossible, and are already planning the 3rd National Congress of Organic Agriculture and Livestock for 2017.

Become a member of Aegilops and participate actively in our actions

By participating as members of Aegilops, you actively support the protection and conservation of agricultural biodiversity and organic farming in our country. You can also purchase local seed varieties from our network for experimentation and testing, from our Focal Points and the various ecofestivals and meetings of the organization, where seed exchanges and donations are made.